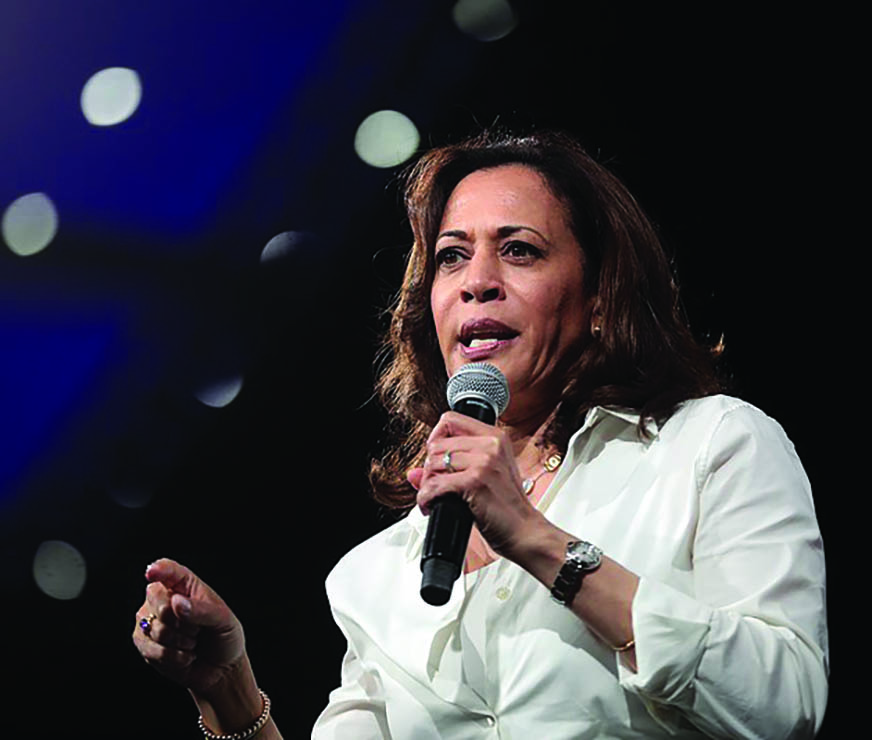 The American people benefitted from a very clear contrast, Harris said of the first presidential debate. On one hand you have Joe talking directly into the camera, trying to bring some semblance of maturity to a conversation with a county that is in the midst of at least three major crises at a proportion that weve not experienced in generations on the other hand, you have Donald Trump who spent the whole time interrupting, bullying the moderator and lying to the American people.

A former prosecutor and participant in the democratic primaries, Harris is well-equipped to handle a debate stage – a trait that democrats are banking on to take down Pence.

Former Secretary of State Hillary Clinton has confidence in Harris and her ability to discuss key issues effectively – but also had a word of advice.

She has to modulate her responses because we know there still is a double standard alive and well when it comes to women in politics, Clinton said. She’s got to be firm and effective in rebutting any implication that comes from the other side, but to do it in a way that doesn’t scare or alienate voters.

Congresswoman Maxine Waters says that Harris ambition is the most admirable thing about her, and she shouldnt worry about the public calling her names or talking down on her simply because she is displaying the characteristics of a strong woman.

Shes prepared and she will deal with it, and she knows how to deal with it, Congresswoman Waters said. For those of us who are confident that we are capable and that we deserve opportunity, we dont let that stop us from pursuing our goals. We have missions that weve defined for ourselves and we continue to work on those missions.

Senator Bernie Sanders believes that Pence has his work cut out for him if hes going to defeat Harris in the debate.

I believe that Kamala, as somebody who has known her for a number of years, is incredibly smart, tough, and I would not want to be Vice-President (Mike) Pence in a debate with her, Sanders said.

Experts are saying that there is a weight placed on the vice-presidential debate more than ever before as the nation is anxious to see if they will be able to get a more direct and clearer standpoint from each candidate.

There is a weight that’s placed on Mike Pence and Kamala Harris to demonstrate that there is still something useful about two people meeting in the public square and having an exchange of ideas because that’s at the heart of this grand democratic experiment that we have, said Ed Lee, of Emory University’s Alben W. Barkley Forum for Debate, Deliberation and Dialogue. That usually is not placed on a vice presidential debate.

University of Georgia head debate coach Shunta Jordan thinks that anything is better than the screaming and disrespect that the U.S. witnessed during the first presidential debate.

I don’t expect either candidate to back down but am confident in saying we won’t see the disgrace and embarrassment of (Tuesday), she said. I expect to hear more argumentation and refutation. I expect to hear each candidate discuss actual policy or what needs to be the priority in America moving forward.

Many have noted that Pence is generally level-headed and will most likely not come close to the way Trump acted in the first debate. He is said to be practicing his approach to the debate and will focus on the Trump administration’s accomplishments and the key differences between his team and their democratic opponents.

Harris says that she will treat Pence with respect but will not tolerate blatant lies being told to the American people.

Im also not going to stand by quietly if he, in whatever tone of voice, delivers lies, Harris explained. Joe and I have a lot in common, and one of them is that we dont back down from a good fight if its a fight worth having.

Civil Rights Groups Keep the Heat on the Governor to Replace Harris With An...

1 killed, 2 hurt in Malibu fire that spread from house...

Cal State Fullerton bounces back for series split with CSUN