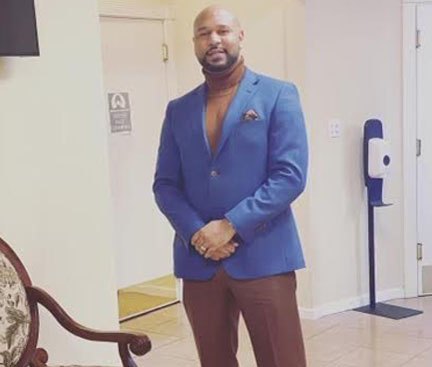 Note: In our printed December 2020 issue, the title of this article incorrectly read Judge Carlos Moore: Making History at the Helm of the Nation’s Largest Association of Black Attorneys”, when as published in the story, Moore’s tenure as president does not begin until July of 2021. The current president of the National Bar Association is Tricia “CK” Hoffler.

In October of 2019 Managing Partner of The Cochran Firm’s Mississippi Delta office, Judge Carlos Moore, flew to Las Vegas to celebrate with his good friend and fellow attorney Travis Buchanan on his achievement of opening a new branch of The Cochran Firm in Las Vegas. To mark the occasion Moore, Buchanan and three close friends went out for dinner. In the course of the evening, the group of five black men made up of two lawyers, a lawyer in the making, a judge, and a doctor, supported each other’s achievements, talked about their goals, and enjoyed their company over food and drinks.

When they finished, they took a group photo which Moore later posted to his LinkedIn profile with the caption ‘Who said black men can’t grow up to be lawyers, doctors and judges’. And to his surprise, the photo went viral receiving tens of thousands of reactions.

The response to their photo caused a somewhat obvious realization: they were quite a remarkable group. Not only had each man become successful by persevering through personal hardship despite having practically no role models in their family or community, but they collectively were an example of what anyone can achieve if they believe in themselves and their dreams– especially for young black men. The idea to write a book about their experiences was born, and the result is their newly published collective memoir, The Five Brothers: Our Journeys to Successful Careers in Law & Medicine.

“We wanted to show that in this day and age, when there’s so much negativity about African American men, there are some positive things going on and different paths people can take,” says Moore about the book. “We overcame the odds despite the hurdles we had to clear, and we still became successful. And we are still striving for even more success going forward.”

This year Moore has seen some of the success he’s been striving for come to fruition in the form of a major career accomplishment. Along with the publication of The Five Brothers and being named one of African Leadership Magazine’s Top 100 Most Influential African American Leaders in the United States, in July after a hard-fought campaign Moore was named President-elect of the National Bar Association and will be sworn in as President at the organization’s 96th annual convention next July in Memphis.

Founded in 1925, the National Bar Association (NBA) is the nation’s oldest and largest network of predominantly black lawyers, judges, law professors and law students, representing over 66,000 members. For Moore, leading such a prestigious organization is an honor and dream come true.

“My first year at the convention was in the year 2000 as a first-year law student. I was overwhelmed and amazed at the magnitude of successful black lawyers and judges who were at the convention. Coming from a town that had maybe one black lawyer and judge, that was all I knew,” recounts Moore. “I knew at that point I would become the President of the National Bar Association, so it’s been a dream come true for well over 20 years. To represent 66,000 black lawyers, judges and law students is surreal.”

His win was especially sweet for Moore because, not unlike POTUS-elect Joe Biden, it was his third time running for President.

“I wanted to be President of the National Bar Association and it was very difficult to win,” Moore admits. “I lost the first time by one vote then lost the second time, and I was honestly afraid of losing a third time. But I was more afraid to not try. No one in the history of the NBA has ever become President after losing two times, but I knew I would eventually win.”

Now as the President-elect Moore has hit the ground running, working as co-chair of the NBA’s election protection task force which aimed to protect voter rights and use its resources to guard against voter suppression efforts.

“I believe we were successful in our efforts and that everyone who wanted to vote was able to and their votes were cast successfully,” says Moore. “But now our work has been extended due to the two contested elections for Georgia Senate seats so we will be getting our lawyers on the ground and virtually in Georgia to make sure that every vote counts.”

The Georgia Senate races, which will determine the balance of power in the Senate, will be crucial to Moore’s term as President where he has a detailed legislative agenda that he and his team will be lobbying for in Washington which focus on economic justice and empowerment, and social justice reform.

With the incoming Biden-Harris administration transitioning into power, Moore and his cabinet at the NBA are poised and ready to make a difference.

“Within our first hundred days we will begin our lobbying effort,” says Moore. “We have Cory Booker in the Senate and Hakeem Jefferies and others in the House, and Kamala Harris is a member of the NBA, so we’ve already had conversations with her team. Joe Biden announced he’s looking to put a black woman on the supreme court so we’re putting together a short list for that. We expect to have unprecedented and unfettered access to this administration, and we cannot be more appreciative. We’re well connected and ready for this opportunity.”

Though Moore will now be leading a national organization and rubbing shoulders with Senators to pass laws, civil rights has been the bedrock of his practice since he first started his career nearly 20 years ago. After spending four years working for a public firm, Moore opened his private practice in 2006 and got his first civil rights case shortly after where he represented a young black male who had a gun drawn on him by a school cop, without cause, in front of thousands of his peers in the middle of school. The severe level of incompetence and discrimination displayed by the officer was mind boggling to Moore who filed a suit against the city and school distinct, making waves in the local community.

“From that day on we’ve been doing civil rights and I’ve brought countless cases against cities, counties, and other governmental agencies for police brutality, representing the families of those who have died from excessive force, or died in jail after being beaten by prison guards and being neglected medical treatment, just to name a few,” says Moore.

Later in his career, Moore also led the effort to change the state flag of Mississippi which bears the confederate emblem. Along with litigation, Moore also made a symbolic gesture on his very first day in court as a newly minted judge when he had the bailiff remove the state flag from the courtroom– a move that made national headlines. The lawsuit Moore and others brought against the state flag in 2016 ended up in the Supreme Court, and four years later voters have chosen a new design for the flag which will be rolled out next year.

“We are extremely elated about that,” says Moore.

According to Moore he is “living the dream” in his career following in the footsteps of the civil rights attorneys he grew up idolizing such as Thurgood Marshall, Charles Hamilton Houston, and Johnnie Cochran. Looking forward, his goals for himself only get wider as he plans to pursue positions in state and national politics.

“After my term is up, I’ll be looking into a run for Congress,” says Moore. “After that the Governor of Mississippi or a Senate seat, and who knows maybe by then I’ll be ready for a run for President.”

And his optimism doesn’t end with his own career but extends to the state of our country as well.

“It’s a wonderful time to be an American,” says Moore. “We’ve lived through a hard period the last four years, but what that does not kill us only makes us stronger. We’re happy to help the Biden-Harris administration rebuild America. We’re happy to be the voice of African American judges and lawyers and we will speak loudly and boldly and honestly to advocate for change.”

Though his ideals are high, it’s these ideals that have pushed him to dream bigger and accomplish more than what has been expected.