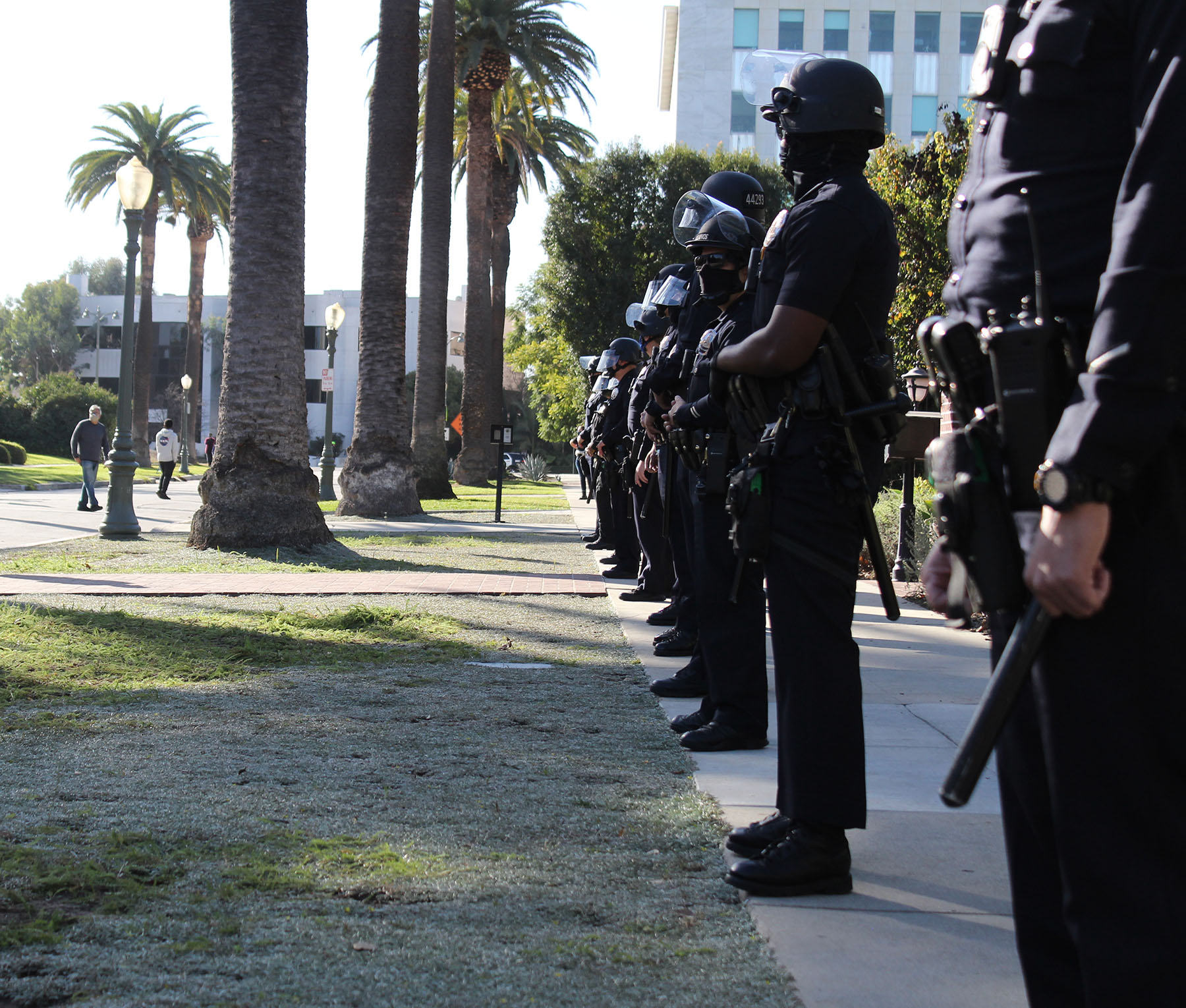 LAPD officers lined up on the sidewalk outside Getty House were conspicuously absent during Tuesday’s protest that marked the 15th consecutive day of demonstrations to demand that Mayor Eric Garcetti remove his name for a Biden Cabinet position.

The reversal came after swift backlash from lawmakers and Black Lives Matter advocates who argued some officers had used excessive force and infringed on peaceful protesters’ First Amendment rights during a peaceful demonstration on Sunday morning.

The LAPD’s two days absence came after several videos posted on social media showed officers wielding batons against protesters as they pushed their way through the crowd. An officer is seen striking a woman wearing a green baseball cap, while another man raised his knee to block the strike in its path.

According to a statement issued by the LAPD minutes after the incident, officers approached the crowd of protesters to cite a “violator for excess use of a bullhorn” – a violation of the city codes that bars “sound exceeding 200 feet.”

A transgender woman who describes herself as a democratic socialist, Jamie Penn, the Sub-District 3 representative for the Wilshire Center Koreatown Neighborhood Council, was arrested and charged with attempting to remove the suspect from police custody. She was released about five hours later.

“We were going to cite a violator, and the crowd tried to prevent us from removing the individual in question, LAPD spokesman Capt. Stacy Spell told LA Focus. “The [suspect] escaped. That’s why we’re in this position right now and why the protest was broken up.”

Asked why it took more than a dozen officers to cite one individual, Spell replied that they had done so “for everyone’s safety.”

But the demonstrators say the officers’ actions in the viral video clearly exposes LAPD as the aggressors.

“This is a political calculation on Eric Garcetti’s part. We’ve been here for 15 consecutive days and today is the second day that there’s been no visible police presence. It has only come on the heels of Sunday’s vicious attack by LAPD on protesters which included young Black children, elders, people with disability, and a number of other vulnerable populations,” said Tabatha Jones Jolivet, an organizer with Black Lives Matter.

Another comment came from Kami Patterson, a ten-year-old-girl who was right in the middle of the scuffle who said the police had threatened to hit her with the baton.

“Go that way if you do not want to be hurt because we will hurt you. He kept saying that and I said, ‘please don’t touch me.’ They had those metal things… the batons. My heart was beating so fast that I thought I was going to pass out. I was scared. They’re not supposed to threaten kids,” she said.

State Assemblywoman Wendy Carillo, who represents the district encompassing parts of northeastern Los Angeles, issued a statement saying, “the right to peacefully protest is a First Amendment Right that is sacred.”

She continued: “I urge LAPD to restrain from use of force, practice de-escalation tactics and ultimately, protect the public. Peaceful protests should not lead to police in riot gear making arrests amid COVID-19.”

Dr Melina Abdullah, co-founder of Black Lives Matter-Los Angeles said they’ve been in talks with staff from the Kamala Harris team and that they’re “very aware of the ongoing protest” outside Garcetti’s residence.

“As for now,” said Abdullah “[Kamala’s] team has not made any comments but we will be following up with them.”

Abdullah also noted that the Mayor realizes that the LAPD’s use of force on Sunday was “bad for his political ambitions” and that is the only reason there are no longer officers stationed outside his house.

Baba Akili, another high-ranking Black Lives Matter member described LAPD’s actions on Sunday as an example of police violence that is built into the institution of policing.

“This is one of the reasons why we’re protesting in front of Garcetti’s house in the first place. Because he has failed to change that attitude within the institution, Akili said.”

Robert Smith, the Richest Black Person in America, to Pay Almost $140 Million Back...