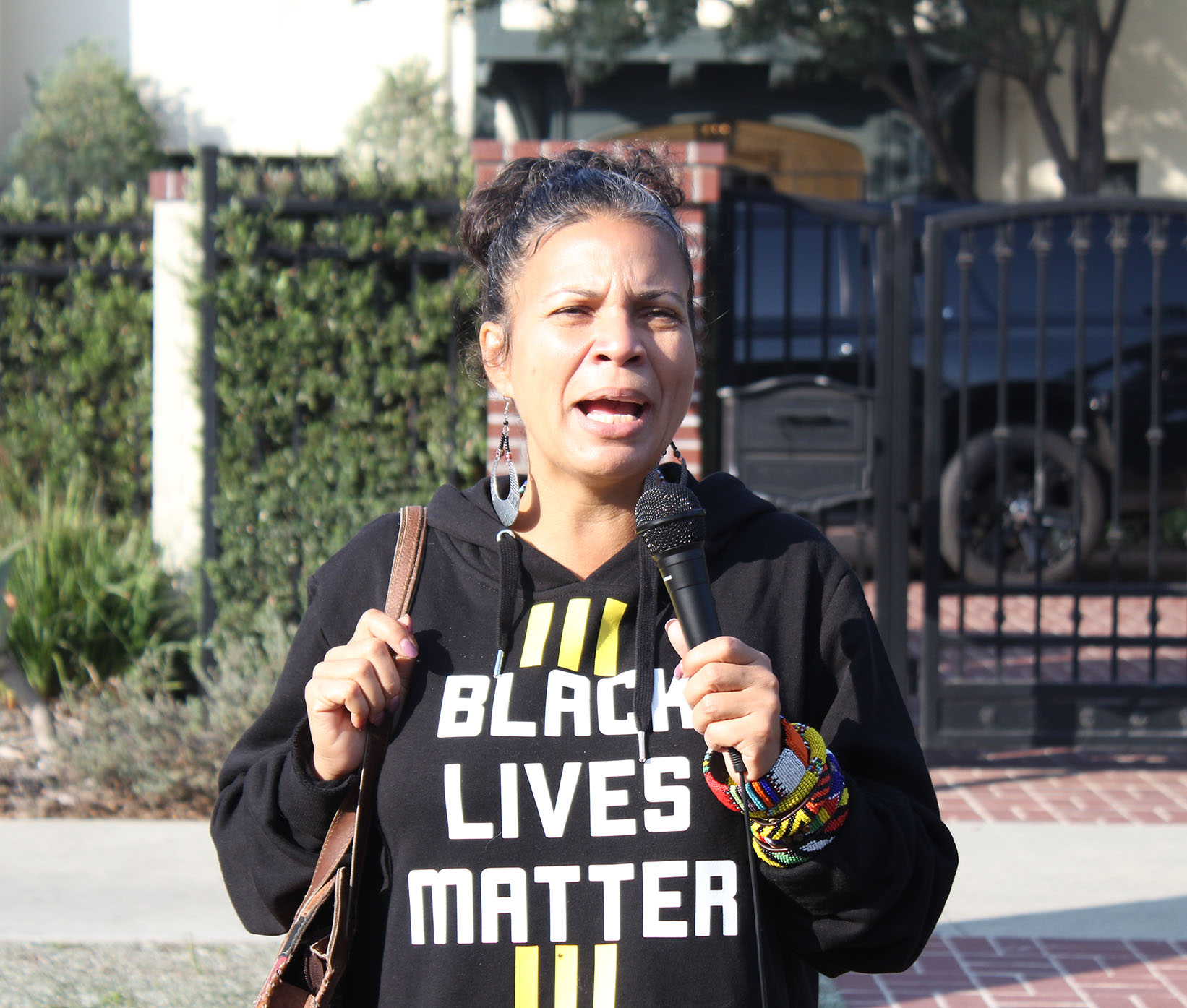 The demonstration marked the 10th day in a row, the protesters have gathered outside Garcetti’s residence in Windsor Square marching up and down the quiet, upscale residential neighborhood chanting “Wake up Garcetti” and carrying “Block Eric Garcetti” signs.

“We’re not going to allow Eric Garcetti who has been disastrous for Los Angeles to set national policy. It’s important that we raise our voices even in the midst of COVID-19 and police repression,” said Melina Abdullah, a co-founder of Black Lives Matter-Los Angeles.

She slammed Garcetti’s record on homelessness and transportation.

The criticism comes amid the Mayor’s handling of the ongoing coronavirus outbreak. The pandemic has engulfed the city with rising cases and the economic setbacks are putting more residents on the precipice of homelessness. Homicides have also spiked, and the city may have to lay off employees due to revenue shortfalls, according to reports.

That coupled with the fact California is home to four of the 10 cities with the largest homeless populations in the country: Los Angeles, San Francisco, San Diego, and San Jose.

Moreover, public transit ridership in the city was also already on the decline for the last five years, but the coronavirus pandemic has only accelerated that decline.

The Mayor, say critics, has failed in utilizing his political platform to remedy any of these pressing issues that have devastated the African-American and Hispanic community especially hard.

“[Garcetti] has failed in Los Angeles and now he wants to fail on a national level. We’re not going to let that go uncontested,” Abdullah told LA Focus in an interview after a day’s protest had just ended.

The Mayor’s record on housing and transportation illustrates an inconvenient reality for Garcetti said Pastor James Thomas, a newly elected representative for the San Fernando Valley NAACP. “We don’t have to tell anybody how bad the transportation is in Los Angeles as it’s quite evident,” he said. “He continues to invest in trains as a means of transportation when low-income residents use buses which are the most efficient way to get around the city.”

Still, it remains anyone’s guess if Biden who began introducing his picks for key cabinet posts last week will offer Garcetti a job in the new administration.

Garcetti who was a national co-chair of the Biden-Harris campaign has said he has no interest in seeking a cabinet position at this time.

But speculation has continued to mount, according to reports within the Mayor’s orbit.

Black Lives Matter-Los Angeles have vowed to protest every day until either the Mayor officially announces he has no plans to go east or Biden outright says he won’t hire him.

Abdullah has gone as far as instructing her followers to utilize the hashtag #BlockGarcetti on social media and flood the Twitter with messages asking if Garcetti would remove his name from consideration to @joebiden’s cabinet positions.

The size of the demonstrations has varied over the past ten days- from 30 to over a hundred protesters at times.

Though the demonstrations have been overwhelmingly peaceful, each day dozens of LAPD officers in riot gear have lined the street – sometimes outnumbering the protesters.

But when demonstrators rallied outside the Mayor’s house on Thanksgiving morning, LAPD officers declared an unlawful assembly and arrested two people.

“LAPD has increasingly ratcheted up their oppression and threatened us with arrests for things like walking in the street or walking on the side of the street of the Mayor’s house. They’ve continued threatening to arrest us for simply being too loud or banging on pots and pans or for using musical instruments,” said Abdullah as an LAPD helicopter rumbled overhead – low enough to create a noise.

Abdullah added that for the past week, BLM-Los Angeles activist have “simply been exercising their First Amendment rights” to assemble and because of that we are being punished for it.

It was the same day that Dr Melina Abdullah stood before the crowd with a megaphone and asked the demonstrators to look around at the police in full riot gear and armed with shields and paintball guns standing across the street.

“Garcetti would rather spend money on LAPD than housing the people of Los Angeles. Shame on Garcetti,” Abdullah repeatedly chanted as everyone roared “Shame! Shame! and Shame!” in response.

The Mayor’s office did not respond to multiple requests inquiring if taxpayers fitted the bill to have LAPD officers stand outside the Getty House every day, nor did they respond to phone calls and emails on Thursday seeking interviews.

“This is the person they’re thinking about giving a cabinet position. The same person who “f*cked up the city so bad,” said Baba Akili, a longtime activist and Black Lives Matter member.

Abdullah called Garcetti a white supremacist and that people shouldn’t be fooled thinking he’s a friend of the Black community.

“It’s almost laughable that anyone would even consider him to take charge of housing on a national level,” she added.